First thing: this place  is closed on Mondays. A guy we met walking in the old medina told us this. None of the guidebooks did. Even though this place abuts the old medina wall, you have to get in from the boulevard Almohades facing the port.

Once we did get in, it was like landing in a little piece of paradise. In a very sensual garden with a fountain in its center. I can only imagine what it is like when the orange flowers blossom. What intoxication it must be!

Started off with an exciting fresh juice Le Corsaire with Peach, strawberry, pineapple and cardamom that is absolutely fantastic. The cardamom brings all of the fruits together with incredible exotic length on the palate! They have a lot of juices, some of which are fantasmagoric! Like mine.

There is no alcohol served here. I thought maybe it was due to the proximity to the old medina. No alcohol at all in the medina. But a waiter explained that this restaurant was supposed to be typically Moroccan and that alcohol had no place in Moroccan cuisine. Au moins c’est claire ! (At least it’s clear!)

We wanted just a sampling of dishes for an aperitif. 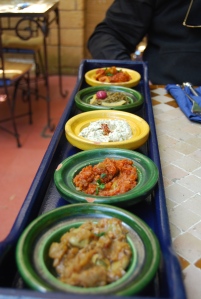 The Kemia Mauresque, were actually a selection of cooked vegetables that the waiter told us were Moroccan salads. All served cold.

Artichoke (farthest away) with tomato was delicately spicy. Tender artichokes. Seemed generally typical of Mediterranean cuisine, something the southern Italians might do.

The sautéed spinach with candied lemon (2nd farthest away) was much more exciting and exotic to me. The candied lemon marrying brilliantly with the spinach. Cutting through the bitterness. Candied lemons are really interesting because of the balance of sweetness and acidity. And very aromatic. Its not something I’ve worked with before but inspiring for things I might do in my own kitchen.

Eggplant purée (middle dish). One of the creamiest eggplant purées I’ve ever had. I don’t know how they got it so white! It felt like there was cream in it, although I highly doubt it.

Salad of red peppers and tomato (2nd away), which was more like stewed. Good, but my least favorite of the lot.

Fava beans (closest). Fantastic. A wonderful marriage of the sweet inner kernel of fava beans with the bitterness of the outer skin (that the French remove) and the other spices that were in there!

The little triangle ones that look like little Indian samosas were made with fish, and delicately spicy.

The ones that look like spring rolls were kefta filled. That spicy ground meet that they serve in all the restaurants. I’m not a kefta specialist, but this was about as good as I have ever had. Energy from the spiciness. Again, not aggressive spicy, but aromatic spicy. Which is actually a longer and more complex form of spiciness.

And the square one was a mini-pastilla. Here there was much too much powdered sugar and cinnamon relative to the size of the pastilla. We had to shake them off a bit so that we could actually get the aroma of chicken (or whatever volaille they decided to use). I had the same feeling I had at Al Mounia about the power of the sweet element in Moroccan cuisine for added complexity and length of aromas.

If I lived in Casablanca, this would definitely be one of my hang outs…wait till you hear about the breakfast served there!!…