Sit down on their wildly sensual terrace for a visit with chef and owner Pierre Boussereau and Olivier Laplaine (front of the house) and you will quite literally get Pierre’s garden on your plate. Infinite varieties of greens, salads, herbs and flowers give you a real taste of summer.

Beet-root and curry amuse bouches, set the tone of freshness and creativity. 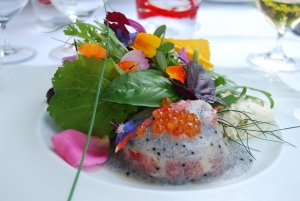 The Lobster salad with nori risotto was exquisite. Super fresh. Lobster was perfectly cooked, and the nori re-enforced the sea-air feel. The salad was probably the most eclectic and exuberant one I have ever had all presented in a mosaic splash of colors.

The tomato Carpaccio and black footed cured ham was equally fresh and summery and full of colors.

Our 2 fish dishes were simple. Presented in a similar style with their skins crispy. The daurade (scup) was accompanied with a beet-root sauce that was very fresh, not to mention colorful and more importantly not invasive to the flavor of the fish. (I think beets are under-rated and chefs who use them well score brownie points with me!:) The sandre (typical river fish of France) was served more traditionally with mashed potatoes and a very delicate (also non invasive) cream sauce.  Both dishes had fava beans from his garden! 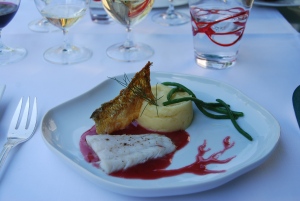 If you don’t have Pierre’s own back yard in your plate, you probably taste influences from his latest holiday. This time was Italy with the Lapin en voyage en Toscane. From reading the recipe I thought the lavender and apricots would dominate the delicate rable (saddle) of the rabbit, but it was perfectly integrated and gave this wonderful feeling of the south of Europe. The heat, the dry air, the spice, the ripeness of life. It was perfect.

The veal was a little more traditional and the cooking time slightly missed (partially, I think due to the way it was cut- the slices so thin that they just keep cooking on the plate even after it is served) 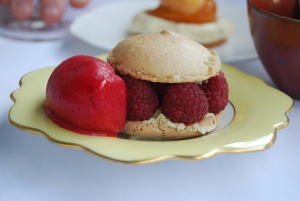 Pierre (originally trained as a pastry-baker) makes deserts that are not to be missed. I like to go easy, especially at lunch, but I had to taste this divine macaroon with raspberries-precise almond with the tart raspberry ice-cream! The raspberries probably did not come from his garden but they sure tasted that way!

The wine list here is a bit eclectic. There are a good number of Chablis producers –including all of the super stars- on the list, being about 30 minutes away from the town of Chablis. But there are also some absolute (and sometimes quite random) finds – like a vertical of Robert Groffier. We compared two 2004 1er Cru Chablis one from Verget and one from Grossot.

2004 is a really great vintage for Chablis because they had less rain than Cote d’Or and the Maconnais and their habitual later harvest (one week after Cote d’Or) was perfect for the great late season weather that stretched from early September to nearly October 10! The grapes were riper than the grapes farther south but still retained above average acidities for this decade. This means that the grapes perfectly expressed the chalk dustiness and sautéed mushrooms in lemon butter than is the typical base of Chablis at its best.

The Jardin Gourmand has been around since 1980. While Pierre Bousserau’s cuisine should have found admirers in the French press, apart from a few years with Gault-Millau, he is either ignored or underrated. Most of his dishes are well worth much more recognition than he’s getting. Quality and creativity at a very reasonable price deserve more attention.

Olivier Laplaine’s explanations (descriptions of the choice of recipes) are amongst the best around.  People who don’t think about their food may find these descriptions a little too analytical.

The Jardin Gourmand has just appeared in a book called Potagers de Chefs with pictures and recipes from Pierre’s garden. He was selected amongst the top chefs in France who grow their own vegetables in their own garden.