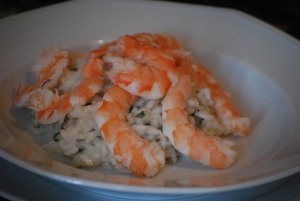 Yesterday, when I stopped in to my favorite Italian delicatessen shop – La Bottega di Piacenza, on rue des Abbesses- I noticed that they were selling theme cook books (risotto, pasta, pizza etc). I thought ‘this is new and a good idea’, so I picked up the risotto one to browse it. There were indeed beautiful photos and fun looking ideas of different ingredients to add to a risotto. There were comments about which rice is best and so on and so forth.

I was shocked to find that no where in the pages I saw was there any mention of what makes a risotto different as a cooking preparation of rice. How can a cook book writer not tell readers what to do to get that creamy wonderful texture that makes a risotto a risotto: the secret to risotto.

It is actually not a secret. It makes sense. But it seems to be forgotten.

The key to risotto is toasting the rice.

Why? Because as you toast the rice, it releases the starch that is in the rice and that released starch, fed by gradual addition of water, is what makes a risotto intrinsically creamy.

I admit that it does help to toast the rice in butter. Butter, you say, but that is not Italian! Yes it is, remember that risotto comes from the north of Italy where the Germanic (swiss and Austrian) and French culinary traditions and practices are very similar.  (I have made risotto with olive oil before and it works, but less well.)

My favorite risotto is one that I learned to make when I worked for Michelin starred restaurant in Rome in the summer of 2000:  Risotto with herbs and shrimp.

I melt butter in a pan, then when it is almost all melted I throw in the rice (Arborio) I usually count a little over a handful of rice per person.

I let the rice toast a bit. As it toasts the aroma changes and it becomes translucid with the butter. It should never turn brown.

As soon as I feel it is toasted enough, I pour in a little white wine. Once it has evaporated, I add enough boiling water just to barely cover the rice.  (I usually but a bay leaf or two into the boiling water for flavor, you can also use vegetable stock instead of the water).

It is important to keep stirring the risotto almost for the entire cooking time and add the water gradually.

With my gas stove, it usually takes about 20 minutes for the rice to be cooked, and I like mine a little aldente. Every 5-7 minutes (from when I first add water) I taste a couple of grains of rice to judge salt, pepper and cooking time.

I aim to have only a little bit of water left in the rice before I start adding other ingredients.

I first add a little mixture I make with strands of basil covered with olive oil so that it does not turn black. Then I add add a combo of fresh rosemary and thyme. Then I add chopped parsley. Then I stir in a table spoon of fresh cream. I put only a very small amount of parmesan on (parmesan is very strong and can dominate other flavors very quickly). 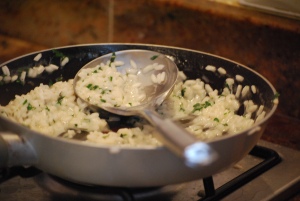 I serve the risotto and place pealed pan sautéed shrimp on top. 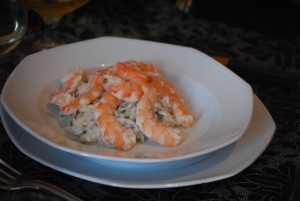 What do  I drink with it? I personally like a very peppery, chlorophyll Sauvignon from the Loire, like a 2007 Cotat Sancerre or Fié Gris 2004 from Jacky Preys. But it also goes well with lighter reds (chilled). In fact, the last time I served this risotto, we had a 2004 Vosne Romanée from Georges Mugneret Gibourg and the combo was perfect.